This was only the second time I’d visited this restaurant which is a shame really as it’s only around the corner from where I have worked for the past two years.

The restaurant is up on the top floor of its building and is part inside, part outside. You enter via one of two glass-topped lifts. Ascending in those lifts conjours the scene in Gladiator where Maximus has been knifed in the side by an evil Joaquin Phoenix, who is leather clad in white, like some kind of demonic Roman stay-puff man. Maximus looks upward as the chamber ascends, delivering him to meet his now already decided fate. 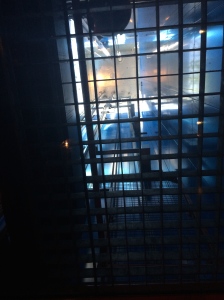 Luckily there was no such menace to greet us, just lots of very smiley and helpful staff who guided us to our table. Sitting outside is such a luxury in the UK as the weather so often doesn’t permit it and in London there isn’t the space for it. When you can sit outside you’re often competing with the traffic noise and so on.

With the Coq d’Argent the only disturbance we had to contend with was a police helicopter swirling overhead now and again. Aside from that, it was blue skies and topiary all the way.

While the a la carte menu can be a touch Katie Price, they do a set menu which is very good value – £26 for two courses – and we went for that.

After destroying the hopes and dreams of the sommelier by not ordering any wine (we had to return to work), and instead asking for soda water, we awaited the first course: sea bream with steamed fennel and leeks, and a sauce vierge. The bream was perfect – flesh moist and meaty, skin salty and crisp. The fennel – which I don’t usually go near – was subtle, almost sweet. And the whole thing together was a light but substantial mmmmeal. We had spinach on the side – after a 30 minute debate with the waiter – spinach? beans? both? neither? two spinach or one? maybe three? JUST ONE SPINACH! Please…

A note about the bread: yum. Two varieties. Warm and fresh. With excellent salty butter. We asked for a second basket, just because.

Pudding: Weez went for a very healthy pineapple affair, while Jenny and I opted for the chocolate fondant with praline ice cream and nuts. 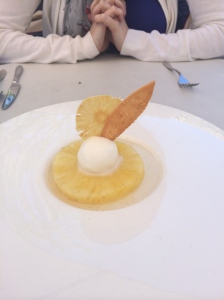 After witnessing a man literally ripping apart his chocolate fondant with his bare hands in Cafe des Amis a month ago, disgusted by the lack of goo he found in the middle, we were delighted to find an abundance of chocolately goo in ours.

All that was left was to eat the birthday truffles they very kindly brought Jenny, photograph some plants in bottles, bid farewell to the now very depressed sommelier, and descend the lift back to the cells.

All in all, top marks for venue, service and food. Though I’m still not quite sure what these plants in bottles were all about… 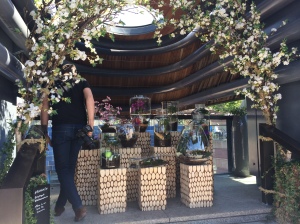 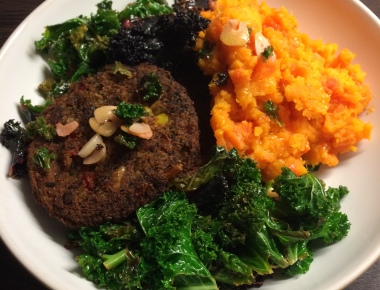