So you’re all set for an evening of fizz, films and blinis and then you receive THAT text: the Blini Shortage of 2017 (BS2017) has arrived. So I asked myself the question anyone faced with a Code Red culinary crisis asks: What Would Delia Do?

There is nothing quite like a plate of these warm, soft, savoury bite-sized pancakes, topped with a dollop of cool cream and a sprinkle of caviar, its saltiness popping in your mouth as you take the whole thing in one go. And the homemade versions are, as Delia says, much nicer than shop bought.

Delia has this strange notion of giving just TWO blinis per person. Two of us went through 30 in a weekend so you can make your own mind up about that… and us. Try first, judge later.

I had to go with what I had in during the BS2017 which was some Malthouse bread flour and some white self raising.

I always top these (I do have them quite a lot…) with a teaspoon of creme fraiche and a small amount of caviar (lumpfish roe).

Delia has these with smoked salmon and puts the cream on the side. This might be because they’re served heated and the cream could melt. If you serve them warm rather than hot that shouldn’t be a problem. The main aim is to make the blini->oven->mouth timeframe as short as possible. So don’t do what Delia does in this instance. Warm them gently, put the toppings on together and serve immediately.

For this I used 200ml creme fraiche and half about 3/4 of a pot of lumpfish caviar (roe).

First get a large bowl and sift the flours into it. Add the yeast and the salt.

Put the creme fraiche and milk into a pan and warm gently – whisk the cream into the milk as it warms. (Only warm, not hot as high heat kills the yeast.)

Whisk the egg yolks into the milk/cream. When combined, pour the mix into the bowl of flour and whisk it all together to make the batter.

Cover the bowl with a (clean) tea towel and leave in a warm place for an hour. I left it in the kitchen which is a warm room generally. Delia suggests you can place the bowl into another larger bowl of warm water. There are no bowls in the world bigger than the bowl I used for the batter and just leaving in the kitchen worked absolutely fine.

After an hour the batter will have risen up and you’ll see bubbles coming to the surface (or you should.)

Whisk the egg whites until stiff, then fold gently into the batter. Cover and leave for another hour.

Then you’re ready to make them!

I have a 1 tablespoon measuring… spoon and I used that to create as evenly-sized blinis as possible. Delia seems to make 10cm wide blinis. I prefer smaller ones.

Put a large non-stick frying pan on to a medium heat and brush with a mix of olive oil and butter – not too much. Do a one-blini test run – the first are always a bit anaemic. Then depending on the size of the pan you should be able to fry in batches of five or six.

Pour the tablespoon of batter into the pan in a small circular motion and you should find that they form themselves quite well. The batter is thick so they shouldn’t spread much. (Delia does hers in two goes – one ladle and then another on top, I just did it in one – lazy.)

Cook on one side for 40 seconds and then flip and do the other side for another 40 seconds – I did a few for longer as the temperature of the pan will go up and down throughout. You’ll need to re-brush the pan with a little butter in between and be careful not to let the pan get too hot or it will start to smoke.

Put the blinis onto a wire rack to cool. When ready to serve, I put them on a baking tray and into a 180C oven for about 4 minutes. They were already room temperature. The rest I put in a bowl in the fridge overnight and heated slightly longer the next day.

Then all that’s left is to top them with delicious things (see above) and serve.

One thought on “Today’s delivery – you have one missing item: blinis” 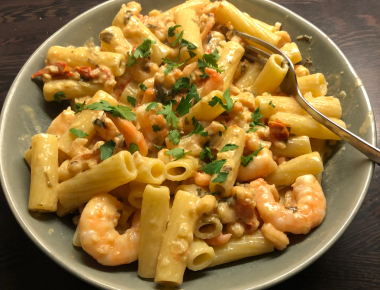 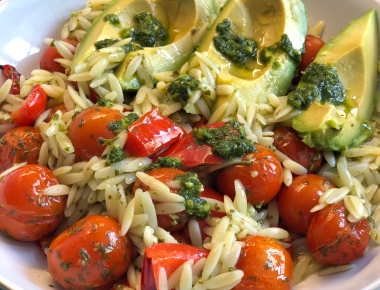 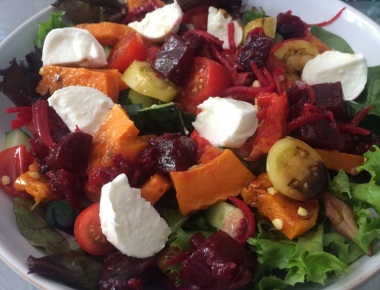